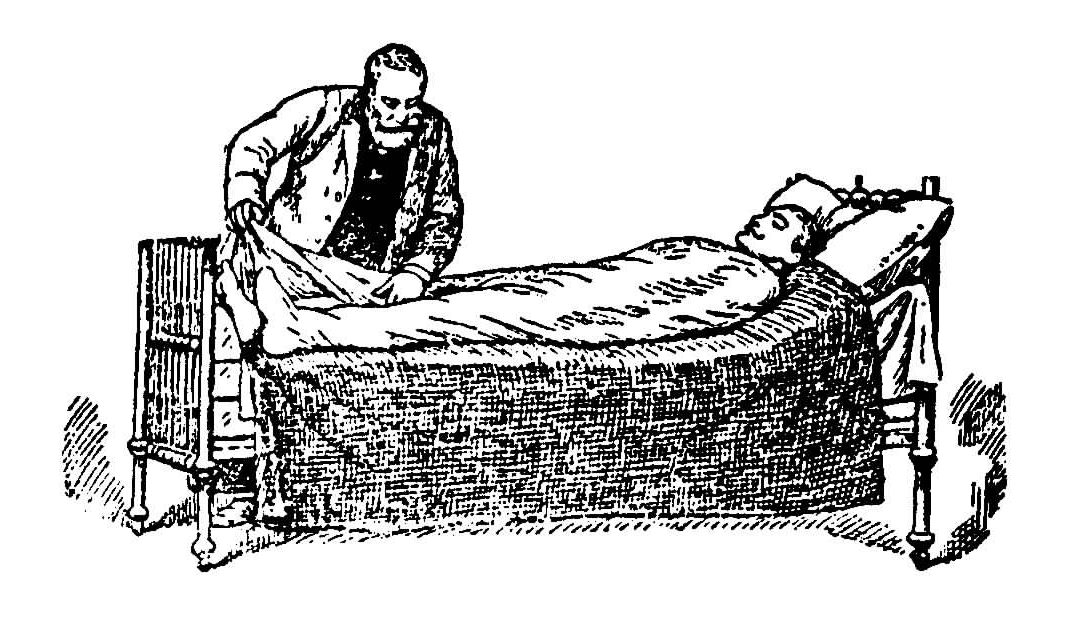 Last week, I offered a guest post by Dr. Gi Ming “Lili” Chan. In order to experience a treatment that I thought would be useful for just about everyone, I went to Dr. Chan this past week for a constitutional hydrotherapy experience. I was a little nervous when she told me that she would be applying cold water to my upper body (it’s winter here, and there was a blizzard in progress outside during my appointment), but I thoroughly enjoyed the experience. If you haven’t had one of these treatments, do yourself a favor and find an ND who will provide one!

Hydrotherapy is one of the oldest methods of healing and has been utilized in most ancient cultures in some form or another for thousands of years. The basic definition of hydrotherapy is the use of water at various temperatures to create a therapeutic effect on the body. The goal of Constitutional Hydrotherapy is to normalize blood flow through the main organs of elimination: skin, liver, digestive tract, kidneys, and lungs.

Constitutional hydrotherapy combines alternating hot and cold towels to the front and back of the torso with physiotherapy devices in order to directly affect various organs or tissue states as well as to treat pathways of digestion and detoxification in a systematic manner.  This treatment is more involved than other hydrotherapy treatments but is very effective for almost every condition. Naturopathic physicians use this method for promoting overall health and immune system strength.

This is what I experienced…

I took off all of my clothes from the waist up (you can leave something on if you don’t mind it getting wet, but full skin contact is best). Then I lay down face up on top of a sheet and 2 blankets large enough to completely wrap me like a taco (think of cocooning). Dr. Chan attached some electrical stimulation pads to various places on my upper body (more on this below).

Dr. Chan then covered my chest from the neck to the waist with some hot wet towels that had been wrung out. Once the towels were applied, she placed two bath towels on top of the wet towels and over my legs, wrapped me in the blankets, and left me wrapped for 5 minutes. She adjusted the electrical stimulation pad intensity to the maximum that was comfortable for me. There was wonderful soft instrumental music playing, and the overhead lights were all turned off.

She came back after the 5 minutes, lifted the blankets and upper bath towel, and placed a fresh hot towel on top of the other hot towels. She flipped all of the wet towels at once so that the fresh wet towel was against my skin. Then she removed the original (now cool) towels and left the new hot towel in place.

Next, she placed cold towels on top of the new hot towel, told me to take a deep breath, and flipped the towels again so a fresh cold one was against my skin (very momentary chill).  She removed the hot towel, left the new cold ones, covered me in the bath towel, and wrapped me in the blankets again. Once again, I received electrical stimulation. I was perfectly warm and comfortable.

She left the cold towels on for 10 minutes, during which time my body heat warmed the cold towels to lukewarm. When she came back into the room, she lifted the blanket and bath towel and removed the now warm wet towels. At this point, she covered me with room temperature towels, wrapped me up again, and left me for several more minutes.

When she came back in, she asked me to turn over to lie face down. She removed the electrical stimulation pads and proceeded to apply hot then cold towels as she had on my chest. There was no room temperature phase while I was lying on my stomach.

When the procedure was over, I felt completely relaxed and had a heightened sense of well-being. The procedure lasted about an hour in total. Although I had not reported any discomforts or conditions, I did feel a difference in overall vitality when the procedure was complete. Dr. Chan told me to drink lots of water and to eat a substantial meal when I got home.

Part of what the procedure was meant to do was to help digestion and elimination. I had the procedure in the later afternoon on Tuesday and didn’t notice anything different until about 48 hours later, when I was able to eliminate much more than is usually the case. I do not have a problem with elimination these days, but it was wonderful to feel that I was really cleaning myself out in a way that was not harsh or “medical”.

Constitutional Hydrotherapy is often used to address the following conditions:

Constitutional Hydrotherapy should be avoided in the following instances:

It may sound simple, but the placement of alternating hot and cold towels onto the torso carries effects to nearly every system in the body. Adding in the physiotherapy both improves and individualizes this treatment further. In a single one hour treatment, constitutional hydrotherapy enhances immunity (via the blood cells in the abdominal lymphatic tissue), improves digestion (by enhancing peristalsis via the nervous system, and increasing enzymatic output of the pancreas, gallbladder, and stomach), cleans and strengthens blood (by improving circulation through and the function of the organs of elimination, and adding in white blood cells), increases lymphatic circulation (via the pumping effect of the hot and cold towels and sine wave machine), and balances the tone of the autonomic nervous system (via the spinal and sensory reflexes caused by the hot and cold water and electrical stimulation).

All of that may sound impressive – and it is – but most important is that it all fits within a clinical theory of naturopathic medicine that allows its effects to be cumulative, efficient, and targeted to your specific condition:

A useful naturopathic principle holds that health is proportional to both the nutritional quality and cleanliness (low in inflammation, oxidative stress, and maldigested proteins) of the blood, and to the ability of the body to circulate the blood to all parts of the body freely, evenly, and efficiently.

Blood that is high in all the nutritional and constructive elements and low in inflammation and that can circulate freely results in health.

The inverse of this is that inflammatory blood of low nutritional quality that is unevenly circulated and therefore creates areas of hypoxia and hyperemia (too little and too much blood, respectively) often leads to and is a clear sign of disease.

When you place a hot towel on the skin, it brings the blood and other fluids up to the surface in order to maintain the body’s homeostasis (overall balance). When you follow this hot towel with a cold one, it causes blood vessels to constrict at the skin surface and the blood to move back down into the organs and toward the center of the body. If you leave the cold towel on the skin, the body will eventually move the warm blood back up to the surface in order to warm the towel. Therefore, through the simple placement of two alternating towels, you’ve created an oscillatory effect that moves the fluid outward and inward through a full cycle. This not only pushes blood through the liver, skin, kidneys and lungs; it also restores balance to the abdominal organs via the autonomic nervous system. In particular, the  last cold towel causes a reflex that stimulates the parasympathetic nervous system, which mediates the repair of the body and digestion of food. It also pushes immune cells into the blood stream via the lymphatic tissue in the abdomen. This combination cleans the blood (via the organs of elimination) and strengthens the blood (via the white blood cells). Because of the action on the autonomic nervous system, the body continues the actions of the treatment long after it is completed.

The ability of the holistic practitioner to individualize the treatment lies in individualized use of herbal medicines during the treatment, prescribed variation in sequence of the towel placement, and targeting specific organs and tissues with the physiotherapy devices.

The Use of Physiotherapy Devices

The very idea of using electrical devices as an important part of a “natural” treatment can often rub people the wrong way before they even have a chance to experience it. The key thing to remember is that each of these devices is used in a way that facilitates our body’s natural physiology in the same way that the hot and cold towels do. They can be likened to a gentle massage technique, all the while enhancing organ function without the need for two or three people to be working simultaneously. The bottom line: give these a chance before you pass judgement—they truly work wonders when used correctly. I asked Dr. Chan about ways that an equivalent effect could be achieved without electrical stimulation. She mentioned a peat bath (https://www.alive.com/health/the-therapeutic-bath/), and we also talked about sitting in a sauna and then rolling in snow or being exposed to heat and then being wrapped in a frozen sheet. Constitutional hydrotherapy is definitely more gentle that these latter two possibilities!

As mentioned above, Dr. Chan used electrical stimulation on me while I was lying on my back. Her system uses 4 pads that are attached to the body with wires that run to a machine that produces electrical current that is timed and adjustable in strength. Such stimulation is used with almost every hydrotherapy treatment these days. In my case, I know that one pad was over my liver, a couple were on my upper back to help with shoulder tension, and one was in the lower spine area.

Constitutional hydrotherapy feels great! When combined with an individualized diet and lifestyle plan that provides the right nutrients and keeps inflammation low (so that the detoxification of the hydrotherapy doesn’t have to be constantly playing catch-up), it can have a remarkable impact on both acute and chronic diseases or – if you are healthy – as a wonderful maintenance protocol. Hydrotherapy is a relatively inexpensive and almost universally available option for ongoing health. I would compare the price and duration of benefits to Epsom salt bath floating. As a therapy for serious conditions, it might be used once a week. Otherwise, one to two times a month can be extremely helpful. I give it two thumbs up.