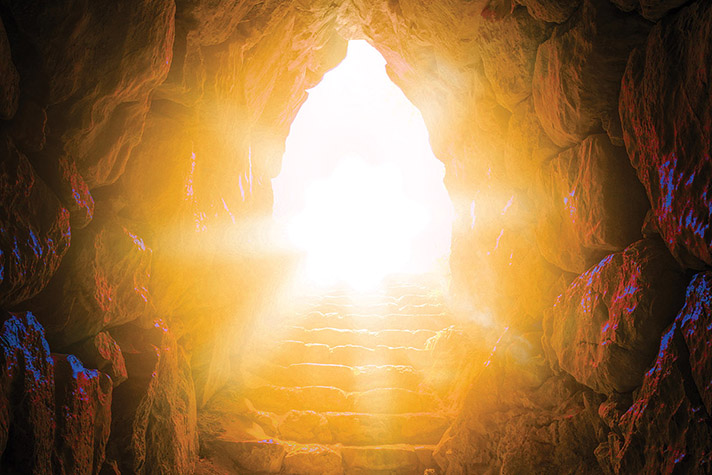 Today is Easter for many Christians around the world, so it seemed a perfect day to talk about the miracle of resurrection. This won’t cover the topic in the way you’d think, so read on no matter what your faith practice is or even if you have none at all.

As you may know by now, I am a gardener. Because of this lens, many of my analogies and the ways in which I experience my deepest joy have to do with the world of plants. I am sometimes asked how I can believe that there is life after death. For me, the answer is both simple and profound: perennial plants.

If you have ever spent time watching a local landscape change over the course of a year of seasons –  especially if you live in a northern climate – you have seen flowers, vegetables, fruiting plants, herbs, weeds, and even trees appear to die as the weather turns cold and the hours of sunlight decrease. Leaves and stalks turn brown and fall, ultimately dissolving back into the soil from which they came.

Part of the reason that we find spring so delightful is that these “dead” perennial plants usually come back to life. Green shoots appear, then mature leaves, and eventually a new round of flowers and perhaps even edible fruits. Even the annual plants that do not grow back have produced seeds that can be planted to start a new round of growth, multiplied many times over from the abundant seeds that can be saved from a single original fruit or flower. Some plants are kind of a hybrid, in that they do not grow back but they self-seed, causing new plants to grow where the seeds fall. The amazing part is that even seeds are technically “dead” until they come into contact with the right combination of soil, heat, and water.

Each seed knows exactly what it is designed to become and how it is designed to mature and produce more seeds. The will to continue to reproduce is unstoppable. The seed is a complete “grow kit” with everything needed to come to life. No seed ever turns into something other than what it was formed to become (despite what you and I might think about some of the strange things that grow in our gardens due to cross-pollination, bird droppings, and wind deposits).

Humans and plants have much in common. We are both carbon-based and need water, sun/heat, and nutrients to survive. We carry our “seeds” within ourselves until they are mature enough to be brought into the external world. And we have a tremendous will to live and to fulfill a unique purpose. Just as plants do their best to keep growing through periods of excess rain and drought, pests, diseases, mold and mildew, we humans are on a constant quest to find ways to stay healthier, live longer, and blossom more fully.

Just this past week, the world had an opportunity to see a human fight back like a plant. Yes, I am referring to Tiger Woods. In case you are not familiar with Tiger Woods, let me give you a little background. Eldrick Tont Woods was born in Cypress California in 1975. His love for golf is lifelong and legendary. He was playing with a putter before he could walk and was featured on the TV show That’s Incredible when he was 5. From his PGA debut in 1992, he steadily rose to become a dominant player on the professional circuit in the late 1990s and early 2000s. I am not a golfer and don’t understand it much, but you couldn’t be a follower of U.S. news during those years without knowing about and being deeply impressed by the sheer passion, relentless work ethic, and skill of this unique performer. Through the years until 2005, he was practically untouchable on the professional golf circuit. He married his long-time girlfriend in 2004 and things were going smoothly despite the passing of his father – the rock and mentor of his life – in 2006. A daughter was born in 2007 and, despite knee problems, he was still winning big. He took off several months starting in June of 2008 for reconstructive surgery. His second child, a son, was born in early 2009.

But life was not as good as it had been. Tiger had not had a major win during the 2009 season, and – since November of 2008 – rumors of infidelity had begun to surface. There was a bad car crash outside of his house in November of 2009 and proof of more than a dozen affairs. His wife returned to her native Sweden (the divorce was final in 2010), and Tiger began a long, slow, and brutal process of rehabilitation of body, performance, and reputation. He started taking complete ownership of his infidelities by apologizing publicly to his fans in December of 2009.

In the nearly 10 years since then, Tiger has made several attempts at a comeback, has been plagued by several new injuries, has worked through more surgeries, and has successfully retained custody of his children. Every single part of his life has been under a microscope. Americans love success stories, but this was a success story that had been deeply derailed. Many turned their backs on him, but others continued to believe that his basic love of and dedication to golf would drive him to rise again.

If you haven’t been following Tiger’s progress in recent years, I am happy to report that…he has done it! On April 14, 2019, Woods completed a final-round 2-under 70 at the Masters for his first major championship in nearly 11 years. It was his fifth win at the Masters and the 15th major title of his career, reviving his chances of reaching the record 18 held by his friend Jack Nicklaus. He never gave up. He fought like a plant. He focused on what he knew he had been born to do and he never stopped believing that he could and would do it again.

So, what does all this have to do with the rest of us? It’s a simple message that we always have the opportunity and the “seeds” needed to rise from the dead – physically, emotionally, and spiritually. The key is to discover our strengths and our WHY and to nurture and develop them in every way possible in the midst of – and despite – the drama of everyday life.

Wellness Made Simple is here to offer the education, resources, and customized simple strategies to support your path to discovering and reaching your WHY.